You are here: Home / Reading Lists / The Four Loves / Love Our World / Scholar’s Call: An ecologist in the household of God Today Richard Gunton of Faith in Scholarship shares his perspective on how his Christian worldview and the discipline of ecology interact. We’re delighted to share pieces from FiSch members from time to time, and are grateful for Richard’s thoughtful reflections on ecology. Stay tuned for more on the FiSch ecology working group in tomorrow’s “Highlighting Community” post.

Jesus Christ has called me to follow Him as the world’s saviour and lord. As part of this, He’s called me to be an ecologist. Each of us is called to follow Jesus in a unique way, but we all live in the same world belonging to Him – so I trust that some of my perspectives as a Christian ecologist will be helpful to others, whether or not they are biologists, scientists – or even Christians. Here I want to share some perspectives by exploring a range of meanings of the term “ecology”.

Coined by the German biologist Ernst Haeckel, “ecology” has a Greek etymology suggesting a study of the homes of things. So let’s begin by thinking about the importance of fieldwork, and the naturalists’ tradition of observing plants and animals in their habitats. Indeed, data from amateur naturalists’ records going back centuries in Britain, the Netherlands and other areas offer exciting opportunities for research into long-term trends in biodiversity. Now, judging by the Bible writers, a fascination with the homes and habits of plants and animals sits easily in the kind of worldview that God’s people should have. I think of the wisdom of Solomon, the rich wildlife passages in the book of Job, the imagery of the prophets and some of Jesus’ parables. This year I’ve been privileged to work with a group of Christians on the concept of ecosystem services (about which more below), and the first output of our group was a reflection on Psalm 104, seeing how each creature in that joyful psalm has its place in God’s wonderful world. Ecology cannot be purely office-based. Giving a talk during my PhD studies, I raised a chuckle with the rhetorical question, “Which field do you work in?” “This one!” I answered, pointing at a photo of my field experiment (Fig. 1, below). I strongly believe that student projects (not least PhD projects) should have a substantial fieldwork element in which we encounter real living creatures in their habitats and get to know their habits. That is an important qualification for any ecologist. Ecology is a science. But the path by which a science is built upon naïve experience should be of great interest to Christians. We may say that the sciences seek predictive power by means of an ambitious programme of abstraction and generalisation – and ecology sits comfortably here. We need ecological theories. But the challenges here are considerable, because ecology is concerned with all kinds of organisms, from mammals to bacteria and from trees to microscopic algae, coexisting in almost every location on Earth, co-adapted to each other as well as to their environments, and exchanging genetic material with each other across great distances. Even gathering useful data is tough: it’s rarely clear how an animal’s body actually functions in the wild, how genetic information shapes a plant’s growth or at what scale we ought to study a species in order to find robust regularities. So methodology is our first challenge on the path to ecological theory – yet the utility of methods depends on what we want to know, and that depends on the theories we seek to embellish or overthrow. So we must pursue a cycle of learning. As an undergraduate I was challenged and inspired by my courses in history and philosophy of science, as taught by historians and philosophers of science (not practising scientists), and I encourage Christians to take serious interest in these disciplines. Otherwise we may fall prey to the humanistic notion that autonomous reason produces knowledge out of nothing (more of which below). I’m increasingly involved in projects touching on the philosophy of ecology, and don’t see why a Christian philosophy shouldn’t make better contributions than a materialistic one. I find great potential in the profound philosophy developed by Herman Dooyeweerd.

So how should a predictive science of ecology advance? Let me give a very personal account of my current research preferences. All ecologists seeking to build tractable models devise creative ways of abstracting from the real world. For example, we can abstract just key features of a generic “organism” and try to model processes like competition, as in Darwinian programmes of population ecology. Or we can abstract “the species” and see if we can make predictive generalisations about the numbers of generic species in different places, as in the geometrical theories of island biogeography and neutral ecology. Or we can abstract “functional traits” (things like body mass and numbers of offspring) and explore their patterns of occurrence in relation to environmental factors (e.g. temperature) as a way of understanding community composition and ecosystem functioning. All of these give insights, but I suspect that some ecologists are attracted to earlier options in that list because of a worldview that says everything is a kind of physics, so things will just become chaotically complex when we try to generalise about whole ecosystems. But I don’t believe God’s creation to be intrinsically physics-based, so I personally find the current explosion in functional trait ecology more promising. In my worldview (especially bolstered by the Psalms), God’s rule over all things suggests He has a word (laws?) for living things as much as for particles of matter and packets of energy. I see some intriguing attempts (not necessarily by Christians, of course!) to formulate useful ecological laws, and I want to be part of the effort.

Ecology evokes networks – and scientific work is itself characterised by collaboration. This fits with my understanding that God calls all humans into communities of service: those who reject His salvation and those who go to church are called alike into working communities – including academic ones. That Christian working group I mentioned exemplified this – but so does much of my academic experience. All my projects have depended on contributions from other skilled and insightful people, and few ecology articles are single-authored these days. That said, I’d like to see more communities of Christian scholarship forming in the faith that they may be able to bring fresh insights into an area of interest.

Ecology also stands for a subject of study – and teaching it can trouble the Christian spirit. Those of us doing research have presumably benefitted from able and inspiring teachers, and it seems right to me that sooner or later I should serve God and my neighbour as a teacher myself. This can be wonderfully rewarding – but also disturbing. In particular, in assessing student work I’m regularly confronted with the widespread scientism that besets our modern culture. I think it important for the common good that various misconceptions be challenged in students. Chief among these is the notion that science “proves” things. Even in ecology, students manage to find certainties that they consider to be guaranteed by our tenuous scientific method – as if facts about the world arose by deduction. I wonder if readers will agree with me that “prove” has acquired a confrontational tone: “If you’re rational, I compel you to agree with me.” Be that as it may, I find a calling to important remedial work alongside the brighter challenge of inspiring students with ecological ideas and a generous sprinkling of anecdotes from natural history. Finally, let me suggest that ecology is unique among the sciences in having given its name to a political agenda. So “ecological” has connotations of “sustainable” and “environmentally-friendly”, and what we call “green” translates into many other languages as “ecological”. This must be partly related to the threats that overshadow some of the richest habitats on earth. We share with historians of art, archaeologists and anthropologists the fear that our very subject matter could be irreplaceably lost – and like many of my colleagues, I was drawn towards our discipline by concern for our environment. The political link reappears in pathways to impact for ecologists. We share with psychologists, sociologists, economists and many others the prospect of directly influencing people’s lives – and we’re asked how to protect endangered habitats, reduce greenhouse gases and prevent the spread of invasive species. Now, bringing my Christian faith into these overtly ethical areas shouldn’t be difficult, and I’m in good company with a range of Christian campaigners and organisations (e.g. A Rocha, Au Sable, and the UK’s John Ray Initiative). But what am I called to do as an academic, and in situations where many courses of action depend on collaboration with non-believers? For real-world impact I’ve realised the need to build inter-disciplinary connections, trust in God’s common grace and think creatively about pathways to impact. I may even need to take an interest in politics.

So my ecologist’s hat is not one to wear all the time. Our science starts from a pre-scientific tradition of fieldwork, and some of its impacts depend upon inter-disciplinarity and non-scientific activism. But ecological science clearly has a place within the theatre of God’s glory, this household of God. “O Lord, how manifold are your works!” as Psalm 104 says, rejoicing in how each kind of creature serves another, including the human being who “goes out to his work…until evening”. May our labours be enlightened by the knowledge of the God who eventually comes to live with us on earth! 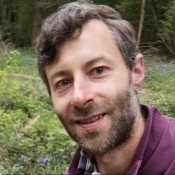 Richard Gunton enjoys being a researcher at both the University of Leeds and the West Yorkshire School of Christian Studies. He studies ecology as one of the many aspects of God's wisdom: initially plant population dynamics and now increasingly the framing of conservation ethics - motivated by a love of Christian philosophy, the tracing of wisdom in creation. As coordinator of Faith-in-Scholarship , he works at bringing communities of Christians together in research projects and campus-based discussion groups. His published work can be accessed from https://uk.linkedin.com/in/richardgunton.