You are here: Home / Christ / Christ and the Academy / Navigating Purpose: Re-integrating Faith and Learning, Creation

A basic biblical reason for re-integrating faith and learning is rooted in God the Trinity and based on the overarching themes of creation, fall, and redemption as the essential content of the biblical narrative. In exploring these themes, we can find a philosophical grounding for integrating faith and knowledge. This is a meditation on creation. Meditations on fall and redemption will follow on Tuesday and Thursday.

The one, true God, who subsists in the three co-equal and co-eternal persons of the Father, Son and Holy Spirit, exists. In a gracious act of unmerited favor and out of unlimited extravagant love and grace, this Trinitarian God made everything that exists out of nothing (ex nihilo) by means of his originating and sustaining word (per verbum). As the psalmist declares,

By the word of the LORD the heavens were made,

For He spoke, and it was done;

He commanded, and it stood fast.

According to Scripture, therefore, God’s first mighty deed was the creation of the universe and all things within it (Neh. 9:5-6). For this reason, the Church has historically affirmed the existence and creative work of God as a foundational article of Christian belief. For example, in the opening declaration of the Apostles’ Creed, Christians affirm that they “believe in God the Father almighty, maker of heaven and earth.”

Not only did God make the heavens and the earth by his creative word, but he also designed all things intelligently such that the entire creation embodies and expresses his astonishing wisdom and understanding. As Proverbs 3:19 states, “The Lord by wisdom founded the earth, By understanding He established the heavens.” Perhaps the notion of an anthropic principle and a “fine tuned universe” supports this biblical teaching, scientifically.

Furthermore, there is no aspect of God’s handiwork, whether small or large, that is not governed sovereignly by his laws and ordered by his norms. Everything in the natural world operates as it should according to divinely ordained principles and purposes (e.g., gravity, animal reproduction, molecular and atomic structures). God also ordered the moral, social and cultural worlds; human beings, if we are wise, we will seek to discover and apply the norms that regulate these history- and life-determining spheres of life. Indeed, God has established an unbreakable covenant with creation that includes a fixed order or pattern for material reality and a set of socio-cultural and moral guidelines for every aspect of human thought, life and culture. The world as a whole is cosmo-logical, cosmo-sophical and cosmo-nomical in character, that is, it is a creation made by God’s word, permeated by his wisdom, and governed by his laws and norms throughout.

All that God made was unspeakably good (Gen. 1:31; cf. 1 Tim. 4:1-5) and everything he made reveals his glory—whether angels, sun, moon, stars, the waters, sea-creatures, fire and hail, snow and clouds, stormy wind, mountains and hills, fruit trees and cedars, beasts and cattle, creeping things and birds, kings and all peoples, princes and judges, male and female, young and old. Creation is doxology, for as Isaiah 6:3b states, “The fullness of the whole earth is His glory.” This sacramental or sacred perspective on reality should evoke a response of worship and praise from those in covenant with him as Creator and Lord and Redeemer.

Because God created all things good, and because he gave humanity responsibility to care for creation and ability to understand it, in the original creation faith and learning were seamlessly integrated.

Thought: At creation, faith and learning were seamlessly integrated.

How do the basic themes of creation, fall, and redemption as the essential components of the biblical narrative help illuminate our understanding of the notion of integrating faith and learning?

Lord, in my efforts to re-integrate my faith and my scholarship, help me to see this world as shot through with the glory of God. In Christ’s name who lives and reigns with the Father and Holy Spirit—one God forever and ever—Amen. 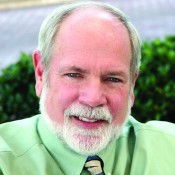 Dr. David K. Naugle is chair and professor of philosophy at Dallas Baptist University. He has two doctorates, a Th.D. in systematic theology and a Ph.D. in humanities with concentrations in philosophy and English literature. Dr. Naugle is the author of Worldview: The History of a Concept (Eerdmans, 2002) and Reordered Love, Reordered Lives: Learning the Deep Meaning of Happiness (Eerdmans, 2008), a Christianity Today 2003 Book of the Year. Dr. Naugle is an avid golfer, gardener, guitarist and drummer. He and his wife, Deemie, who is the Associate Provost at DBU, and their dog "Kuyper" live in Duncanville, Texas, a Dallas suburb.