You are here: Home / The University / Life in the Academy / How Can Christians in Science Respond to Claims that Faith Is Irrational? (STEAM Grant Series March Question)

Question: What do you say to people who assert that faith in Christianity or God is irrational, and/or that scientists shouldn’t believe in the supernatural at all?

You can find the September 2016 introductory post here, November’s question here, and December’s question here. In 2017, we started the semester in February with a post by Ciara Reyes. In March, we’re delighted to share this piece by scientist, educator, and apologist Neil Shenvi.

Is faith in God fundamentally irrational? Many people think it is. A popular internet meme has compared belief in God to belief in the Flying Spaghetti Monster, a being invented to poke fun at the Intelligent Design movement. But why should we think that belief in God is analogous to belief in the airborne, noodly deity of Pastafarianism? As someone with a PhD in theoretical chemistry who worked in academia for over a decade, I’ve heard my scientific colleagues offer three main justifications for this comparison.

First, Neoatheists like evolutionary biologist Richard Dawkins, neuroscientist Sam Harris, and the late journalist Christopher Hitchens insist that religion is irrational because it is based on “faith” which means “blind trust in the absence of evidence, even in the teeth of evidence.”[1] This lack of dependence on evidence is seen as highly irrational. Second, scientists sometimes claim that any belief in the supernatural is irrational. For example, evolutionary biologist Jerry Coyne writes “Science has learned through experience that assuming the existence of gods and divine intervention has been of no value in helping us understand the universe. This has led to the working assumption . . . that supernatural beings can be provisionally seen as nonexistent.”[2] Finally, many scientists see faith in God as an emotional crutch. Some people need belief in an afterlife or a divine father figure to cope with reality. But because science is concerned with facts, not with wish fulfillment, emotionally healthy adults should reject such ideas.

These objections all contain an element of truth. Some people’s religious beliefs are based on evidence that is either weak or non-existent. While religious people would probably adopt a wider view of evidence than Dawkins, one—for example—that would encompass religious experiences or answered prayer, it’s undoubtedly true that religious beliefs can be inherited from our parents or absorbed from our surroundings with little critical reflection. It’s also true that the rejection of supernatural explanations of phenomena has proved highly useful in science and that we can learn a great deal about the natural world without invoking belief in God. Finally, there’s no question that religious belief is not purely intellectual; it is often mixed with powerful emotions and meets deep human longings.

So is faith in God ultimately irrational? I don’t think so.

The first misconception which needs to be corrected is the Neoatheists’ understanding of “faith.” In the Bible, “faith” does not mean “belief without evidence” but is a synonym for “trust” or “confidence.” Even today, if I say that I have “faith” in my wife I mean that I trust my wife. That trust is built on ample evidence that she loves me and is worthy of my confidence. The same can be true of our “faith” or “trust” in God; it can be based on evidence that He exists (see Rom. 1:20 or Acts 17:22-34) and that He is trustworthy (see Psalm 104 or Matt. 6:25-33 or 2 Cor. 1:20).

Second, we need to be very careful to distinguish metaphysical naturalism from methodological naturalism. Metaphysical naturalism is the belief that nature is all that exists. Methodological naturalism is the practice of assuming that supernatural entities—if they exist—will not interfere with our scientific experiments. But does the success of methodological naturalism in the sciences imply that metaphysical naturalism is true and that God doesn’t exist? Not at all. First, a great deal will depend upon what kind of a God we believe in. Traditionally, Christians have believed that while God can intervene in nature through miracles, he normally operates through natural laws, which He created and which He sustains. That is why the Scientific Revolution was driven in large part by Christians who expected to find regular laws and order behind the workings of nature. [Editor’s note: For easily accessible online discussions of Christianity and the Scientific Revolution, see these sources, both originally produced for the Test of Faith project led by Ruth Bancewicz: interviews with Peter Harrison, especially here and here; and this series by Ted Davis, especially Part 3.] The discovery of such laws is therefore not a challenge to a belief in the biblical God. Second, because science is a description of predictable regularities within nature, it is no surprise that it cannot be applied to miracles, which are extraordinary events caused by God, who stands outside of nature. To use an analogy, a budding 7-year-old scientist could work out the simplified physics of the Minecraft universe in great detail and with exceptional accuracy. However, the rules of Minecraft physics will not allow him to predict when (or exclude the possibility that) Daddy will eventually turn off the computer because it is time for bed.

Finally, the fact that emotion often accompanies religious belief is no reason to think that religious belief is false. A scientist might be deeply moved by the beauty of a distant nebula, but it doesn’t logically follow that the nebula is a projection of her own imagination! Even more interesting, many atheists insist that the belief that God does not exist is accompanied by strong positive emotions: of freedom, of relief, of personal empowerment. Does it follow that God does exist after all? In the end, we cannot assume that beliefs are false because they are associated with powerful emotions or because we like or dislike their implications.

But even if there’s nothing intrinsically irrational about belief in God, that doesn’t prove that belief in God is rational either. A rational faith is one that is supported by evidence. So if faith in God can be rational, exactly what is the evidence? This question is answered by the discipline of apologetics, the branch of theology concerned with the development of rational arguments for the truth of Christianity drawn from areas as diverse as cosmology, ancient history, and metaethics. While the nature of these arguments is beyond the scope of this short article, many resources are available both in print and online. An excellent book which is accessible and thorough is Tim Keller’s The Reason for God[3]. Readers of a more adventurous variety can consult The Blackwell Companion to Natural Theology[4].

While it’s understandable that many scientists look on religion with skepticism, their objections don’t ultimately undermine the rationality of Christianity. As Christians, we should meet questions humbly yet eagerly, prepared to give an answer to everyone who asks about the hope that we have in us.

Summary: Is faith in God rational? Three objections and responses 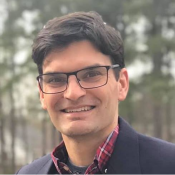 Neil Shenvi earned an A.B. from Princeton, did a PhD in theoretical chemistry at UC-Berkeley, and completed a postdoc at Yale before settling in North Carolina, where he worked as a research scientist at Duke University. Two years ago, he quit his job to homeschool his four children. He became a Christian shortly after starting graduate school and began devouring Tim Keller sermons. A discussion on an atheist blog spurred his interest in apologetics, which has grown ever since. He and his wife Christina met at Princeton and have been married for 14 years. They are members of the Summit Church in Durham, North Carolina.