What’s it actually like when you finally finish a PhD? Recent PhD grad Will Mari continues his series on life after graduate school, Processing Your PhD. See his first post here, and his second here.

My friend Nate recently asked me what I’d do next.

“With life, with everything: you’ve got the job, the girl and now your life basically set,” he said, smiling.

What he was trying to say, I think, was that I’ve achieved all the Big Grown Up Things I had wanted to achieve, the Things that Make One Accomplished. So now what was I going to do?

In contrast, I felt then and still feel now like I know very little, and I know that I am just getting started. I’ll concede that yes, of course, 2016 is and continues to be a big year. But while it is strange to have a year full of life happening after the long walk that was the PhD, it’s not that life failed to happen before.

Friends got married, I dated people, I traveled, I saw (part of) the world. I hiked and ate good food and spent time with grad-school buddies. Life certainly did happen. Life also did not happen. My old college friends, the ones who went into their careers right after or soon after they graduated, started families. They grew their families. They moved and they came back. Life was happening, it seemed, from the outside, more for them than for me.

There was a certain amount of wistfulness, on my part, in watching that. Pursuing a PhD, especially in the humanities or in the more qualitative side of the social sciences, is a half-decade-in-the-making or more. Not to evoke Ted in How You Met Your Mother, but that means waiting to start families, and feeling a bit like the odd old duck who hasn’t ever quite finished going to school, quarter after quarter (or semester after semester). The daily trials of the protagonists of PhD Comics seem painfully relevant.

The overall sensation was one of crossing a big, wavy lake in a canoe. And you know that long, long moment when you’re right in the middle? When you’re sweaty, tired, and a little confused about how you got there? (Or maybe itchy from the oversized life vests you have to wear). That’s how it felt: the shore behind you is far away, and the shore ahead is distant, too.

That feeling became normal, though. Even during and after exams, the prospectus and the early dissertation days, the sensation of interminableness became weirdly comforting. I was “dissertating,” which in my case mostly meant a lot of reading and taking notes and then teaching and grading to make the ends and the middle meet. It was a pleasant enough, years-long trip. I was being paid (not much, mind you, but still) to write and research and to spend time with undergrads.

But then Someone hit the life-acceleration button at some point last year, probably around the time I asked my girlfriend to become my wife. The wedding and marriage became, as they’re wont to do (and as the latter should be), more important (gasp!) than the PhD and even my first full-time teaching job.

The idea of being done, of finishing, would have loomed even larger than it did without the other large life developments happening concurrently. As it was, or rather is, I reached the end of the road and I’m still me.

A note on that: It’s been hard to stop working, I’ll admit. Sometimes, on a day off (a now more consistently wonderful thing) I’ll feel a sudden and strong impulse, almost like that of a smoker, perhaps, for a cigarette, for some work. I must have something I should be doing. Emailing, at least, I’ll think to myself, or taking notes, or reading a journal article, or organizing or planning or (and here I could go on).

I laughed before, hearing the warning from friends finishing ahead of me, about this tendency to seek out work, to have a kind of withdrawal from the “done-ness.” Now I’m trying to push through it. To actually stop working in the evenings, to think about hikes and novels on Saturdays, and not extra days in the library. It will take practice, and probably some time, but I think I’ll get there, Lord willing.

Image courtesy of maxmann at Pixabay.com 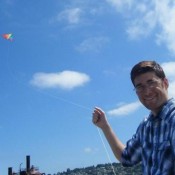