You are here: Home / Christ / Christ and the Academy / Pilgrimage: Liminality in the Academy (Scholar’s Compass) Then the king commanded Ashpenaz, his chief eunuch, to bring some of the people of Israel, both of the royal family and of the nobility, youths without blemish, of good appearance and skillful in all wisdom, endowed with knowledge, understanding learning, and competent to stand in the king’s palace, and to teach them the literature and language of the Chaldeans. The king assigned them a daily portion of the food that the king ate, and of the wine that he drank. They were to be educated for three years, and at the end of that time they were to stand before the king. – Daniel 1:3-5 (ESV)

On a journey to a sacred center, pilgrims often leave behind known and familiar lives to step into an unfamiliar time and place. Even if they have a good image of their destination, they cannot predict what will occur along the way. In this respect, pilgrimage is essentially a time of liminality.

Spatially, the limen is a threshold, a space between. According to the anthropologist Victor Turner, the ritual of pilgrimage takes place in spaces that are between the usual locations, schedules, and practices of participants. Furthermore, Turner reasons from his study of rites of passage that places of liminality “apply to all phases of decisive cultural change, in which previous orderings of thought and behavior are subject to revision and criticism” (2). In these places between, the possibility of transformation is heightened because the usual social boundaries are not in play and, as such, the person must negotiate new ways to interact within the world.

As a place of much ‘in-betweenness’, the academy engages individuals in many moments of liminality. From the application process to the first campus visit, college students step upon a variety of thresholds, both literal and figurative. In these unfamiliar places, students will redefine their characters. Once on campus, students experience a constant series of liminal moments that place them in uncertain territory – starting a major course of study, selecting social groups, searching for a job, preparing for graduation. A career within the academy brings with it its own set of liminal moments – graduate school, research, job searches, tenure. Pilgrims on this journey through the academy are constantly being pushed out of their known worlds into something new. The lack of familiar boundaries sets the stage for change.

The book of Daniel begins by describing a liminal space and time. In this instance, a group of nobles were taken from Jerusalem, their home and center of identity, to Babylon, the center of their conquerors’ cultural and political world. They were entering a three year course of study meant to mold them in the ways of this new society. In this way they could be of use to Babylon. Like many of the stories in the Bible, these individuals found themselves in times and places in between, whether they chose them or not. Clearly, exile is different from pilgrimage – it is a forced journey and the place one is heading towards is usually not one’s sacred center. Nevertheless, whether liminality is forced or chosen, it provides a space for change.

The Israelites being taken to this new land weren’t only in a new location, but also surrounded with new stories and a culture different from what they had known. Some of these new ways were actually antithetical to the former life of those in exile. The rest of the book reveals how a handful of these exiles responded during this time of liminality. Daniel and the others are outside of the comfort of their land and history. However, in the midst of this time they recognize their sacred center – God and living as God’s people. As they focus on this story they reinterpret Babylon not as an enemy to annihilate or a power to bow to, but as another place where God exists. Even though they do not choose their journey, they do choose their response. As they put their faith into practice outside the familiarity of Jerusalem, they see God at work in new ways. These individuals change as they are open to meeting God anew because they are in a place of liminality.

On campus our liminal spaces are often self-selected as we are able to decide on a major, define our research, or choose between job positions. However we, too, can enter times of liminality outside of our control as advisors leave, research grants dry up, or department politics lead to a demotion. Whether we choose our times between, or are forced there, we have to decide how we will respond. Change is inevitable. Our former ways won’t work or are unacceptable. On what will any change be based? What is the sacred center defining our actions during this time?

We can make conscious decisions about the story we are following and how we will respond in this time of uncertainty. Then the transformation in our lives is not based on the circumstances around us, but on our faith in the larger story of God’s steadfast love and mercy.

Lord, Thank you for the opportunities to trust in you more as we step out of our comfort zones and seek to abide in you throughout our journey on earth, where ever it takes us. Amen.

Image courtesy of yorkshireman at Pixabay.com 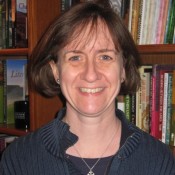