You are here: Home / Christ / Christ and the Academy / Poetry of Grief (Scholar’s Compass)

It started the day after I stepped off the plane in JFK. Twenty-four hours after my return to my home after twelve months away. It didn’t waste anytime.

It was Grieving. It surprised me like the black ice on Pennsylvania sidewalks. Step. Slip. Down.

I had been with Grief before. We’d held hands, walked the rooms of my childhood home, hidden in towns far away from the damage, cried with our faces turned towards the bedroom wall, cried in public with no warning.

My parents separated my senior year of college. The decision had been long in coming. It was not a surprise.

My parents signed the divorce papers three years later, just before Christmas the year I was away in Bulgaria teaching English to rowdy teenagers, learning to read the Cyrillic alphabet, changing my eating habits, wandering around southern Europe by bus. Everything I heard I heard through the phone, after the fact, behind the times.

But I had, in fact, assumed that grieving was over. I could talk about it without too much bitterness. God and I had come to a better understanding of what “all things work together for the good” might mean, and it didn’t mean me being happy or Him rescuing me. I thought I understood.

So this. A New Grief. More tears. Passive aggressive behavior to my parents. Vivid anger towards the church I grew up in. Words stuck in my mouth. What was this doing in me?

A month after my return, I started graduate school for creative writing.

When the marriage first came undone, I had tried very hard to write about it. But, I found, I do not write through strong emotion. Words shut down and go away. Or, they make a clever path circling the pain. I’m too good at words for my own good. Instead, when I’m letting emotion do its work, it runs through my body. It expresses itself in stomach ulcers and tense shoulders; unexplained fatigue and long nights of sleep; food habits; work habits; posture changes. I can’t write, at least not writing that does me any good. The Art I love is taken from me. I am silent.

Then again, I had been trying to write prose. I had wanted to explain my way through. Prose just wasn’t cutting it.

My first semester in graduate school, I took a poetry class. While that wasn’t my “thing”, I was interested in what it could do for my sentences. I wrote by associations and leaps between connections. The first poem that surprised me began with a news story of a girl being stabbed on a college campus near where I live. This meditation leapt to a girl I knew in high school, the first person in my immediate social circles who had parents divorce. Then to me, the scars I carried like my own knife wounds, the body that changes after things fall apart.

Grief, here, does not sound like hope. It does not sound like redemption. It sounds like the middle, the place where I’m left with a lot of questions of where I’m going to end up and what will happen to me. But the writing did make the Grief a sweeter thing, drew out some of the poison. I’m not ready to call Grief a gift yet, but I do call the poems a Gift.

I think I know something of what David must have known as he wandered his way through the Psalms. Some of them were likely written on purpose, in response to some prompt like “Compose a worship song for next Sunday of 42 lines”. But the rest came as they were, something like a dirge. Take Psalm 88:

But I cry to you for help, Lord;
in the morning my prayer comes before you.
14 Why, Lord, do you reject me
and hide your face from me?

and the concluding lines:

You have taken from me friend and neighbor—
darkness is my closest friend.

They were not attempts to fix or mend. They merely stated. They found a way to paint the present losses, to cry out from the undoing. And God, in the saying, was there, the silent answer in the gift of the poems.

My own grief has quieted after the spurt of divorce grieving. I suspect that I will grieve again, find new ways to work through, in, with, among the grief. And poetry might not be the thing that hands me a way through. No sense asking for the same gift twice. But there will be a way and it will be good. The losses will keep taking shape: the scars find a familiar pattern in my body, part of my making and the things I make. 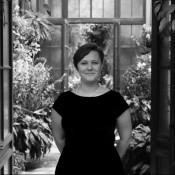 Dana Ray: Writer. Dancer. Tea Drinker. Moonlights on the side as a graduate student in English and Creative Writing at Bucknell University. She also blogs at danamray.com/blog.