You are here: Home / Christ / Christ and the Academy / Where did you find your megaphone? This is the first of four guest posts from Janine Giordano, a graduate student and ESN member from the University of Illinois, on the topic of cultivating your voice and finding your audience while in graduate school. When she is not teaching, she spends most of her time working on her dissertation, Between Religion and Politics: The Working Class Religious Left, 1886-1936.

I exchanged Facebook posts recently with a Christian friend who is an excellent scholar and an excellent union organizer. Her father is a prominent pastor, and she obviously has very similar gifts in shepherding and public speaking. She can move a crowd to cheer at a rally for higher education in a way that seasoned pastors usually only dream for, and she is always, quite naturally, bringing new leaders into the fold. It has always bemused me that her church, like mine, would never permit her a place in the pulpit. Kerry and I have had many discussions of gender and the Church; they usually climax in a fiery exchange of affirmations for the other’s frustration with American churches’ unwillingness to recognize women as fully gifted people.

We usually remind each other that we are not alone and we ought to keep up the fight, but it had been a long time since we spoke, and this time it was different. I began my jeremiad as usual, but she sighed—with understanding but an air of more hope than I expected, even craved—that she had pretty much found other megaphones these days. In the past several months, Kerry has successfully worked with our city government to make some changes in criminal justice protocols; she has led our graduate student union to a better contract—both as our rallying speechmaker and as our lead negotiator with the University of Illinois. She is even working now on getting the police in town to get a better work contract of their own. This time, her affirmation to me was not to keep on fighting my church but to find another. She even pointed out a suggestion.

I looked at this last message in disbelief. “Join another church?” I wondered as I brushed my teeth. Last year I finally left my church of four years after fighting a long, losing battle for the opportunity to teach adult Sunday School. I wanted to engage the adults in my church with the history of the Christianity in the United States so very badly, and kept thinking that if I exposed more and more of the hypocrisy of their rules (for example, that I could teach Religious History at the local seminary, or the local university, that I could sing my message at church, that I could teach the same content to ANY of them if they were under thirteen, by their own rules!) then they would change their convictions about me, even if not about all womankind.

About a year ago, I finally requested a meeting with the Elder Board to discuss some of this, but cancelled the appointment and never returned to the church when the head elder told me by email that I should know ahead of time that nothing about anything we would discuss at the meeting would change their minds. I wrote them back a short email, telling them that I’m getting married and leaving the church. I considered writing something more snide: “If I get married, and my husband taught my course, would you permit the course material?” But they were tired of my commentary, and I was tired of acting like a rebellious teenager. My new church welcomes women to teach Sunday School. So, Kerry’s suggestion to join another, more activist body of believers came a bit late. I had become comfortable, finally, as a woman in the church. And that was no small feat.

But the heart of her suggestion still rung in my mind. In the few years since we had last talked frankly with one another, Kerry had blossomed as a teacher and leader in all sorts of secular venues. She teaches a history course through a special program offered for adults under the poverty line. She works with an interracial citizens group on undoing the environmental hazards common to the North side of town—all while working on her dissertation about the history African American church and the Black Power movement in a small town in Southern Illinois. Now, to Kerry these arenas are not just secular venues. Her commitment to social justice derives from her Christian conviction that all people were equal and loved by God, and no person had the right to trample on others just because they could. She lived out the “Christian Socialism” that I only studied. When religious groups didn’t appreciate her, she found others who welcomed her help.

I stared at her new kind of encouragement on my screen, wondering if I secretly derived pleasure from self-pity, and asking myself the hard question of why I, too, had not sought other venues to express my convictions. “The issues that are most dear to me are different from the ones that drive you,” I wrote slowly, trying to make sure I really believed what I was saying. After all, this was on Facebook, and everyone we both knew might be reading this. “It is the CHURCH that I care passionately about,” I began to type. “I am sick of Church leaders and Church historians denying the fact that people like you are working on behalf of the Church. I’m tired of ‘Church History’ being something outside of the history of the history of Christian women, simply because we can’t find a megaphone in the church.”

The words on the computer screen convicted me. No, Kerry was part of the church, whether or not she had the official blessing of her congregation. I retracted, and began again, “What I yearn for is the process of helping people find their voice—as an activist goal—much more than the immediate results. I like initiating forums and starting conversations.” I have wondered if I have the spiritual gift of confrontation.

So thankful that Mike Hickerson, another of my Facebook friends, read this exchange and gave me an opportunity to share with all of you this month, I’d now like to hear from all of you.

Where did you find your megaphone? Who gave it to you, and how do you like it?

Read Part 2,  “On Fitting-In With the Scholarship.” 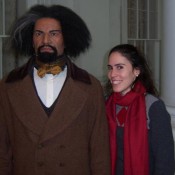 I'm a graduate student in History at the University of Illinois. I'm currently working on a dissertation, _Between Religion and Politics: the Working Class Religious Left, 1886-1936_.