We caught up with ESN blog author David Russell Mosley to learn about the two books he has released in the past year or so. We hope you enjoy hearing about David’s recent publications. You can also browse his ESN posts here.

1. ESN: Would you give a brief description of your novel and your nonfiction book?

My novel, On the Edges of Elfland, is about a young man named Alfred Perkins. He grew up in a small English village called Carlisle where his godfather, Mr. Oliver Cyning, used to tell him all manner of fantastic tales. As a boy, Alfred believed Mr. Cyning’s fairy-stories implicitly. When Alfred got older, however, he stopped believing. Later, after going to University, Alfred has moved back home only to discover that all the old stories were true, and that he has an important role in saving not only his village, but all of Elfland. My nonfiction book is a work of theology. Specifically, it is the published version of my PhD thesis, both entitled, Being Deified: Poetry and Fantasy on the Path to God. In short, the book has two aims. The first is to reinvigorate the Western church’s notion of deification or theosis (and by deification, I mean being so joined to God, through Christ, that, without crossing the Creator-creature distinction, we can call this union deification). The second aim is to argue that human creativity is essential to deification since it is our imitation of and participation in God as Creator. I explore these topics through everyone from Athanasius to J.R.R. Tolkien.

Editor’s note: For those interested in more detail about the idea of theosis or deification, well-known in the Eastern Orthodox church, David offers the following brief summary:

Deification, or theosis as it is usually called in Eastern Orthodox churches, can perhaps be summarised by a line from Athanasius of Alexandria, a fourth century theologian, ‘God became man that man might become God’ (On the Incarnation, 54). The idea is that humanity was created by God in order to be made God, insofar as this is possible. We of course can never become uncreated, we can never be eternal, always existing, but the Bible tells us that we will become partakers of the divine nature (2 Peter 1.4). So deification is the end for which God has created us, it is part of why the Son became incarnate (the other being our redemption from sin). Therefore deification, being made into God in a non-pantheistic way, is humanity coming to the end for which is created by the grace and power of God.

2. ESN: Do you see some interaction between the territory you’re exploring in the novel and the nonfiction book?

I most definitely do. In fact, I wrote them simultaneously during the second year of my PhD. In my thesis, I try to argue that human creativity, exemplified––for my purposes––in the genre of poetry and fantasy, is a necessary part of our deification. In my novel I attempt to enact that. I won’t try to say that my novel is, in any way, an extended metaphor for human creativity. What my novel means is likely best left to my interpreters (my readers). Nevertheless, the two are intimately connected, at least for me.

3. ESN: How did your graduate education prepare you to write the novel, or where do you feel like themes explored in your academic work provided the imaginative resources to explore in the novel?

This is an interesting question. I suppose in some ways what graduate school did for me was teach me the discipline of writing. While I’ve been writing for most of my life, grad school and my PhD work really taught me how to write consistently and often, to set goals in my writing.

The themes I explored in my novel share some fairly clear connections with those in my academic work. For instance, while I’ve been reading Lewis and Tolkien since before I can remember, I studied them and new writers (to me) such as Dante, Chesterton, MacDonald and others in late undergrad and grad school. Reading these authors, whether their fiction or, for those who wrote non-fiction, their other works shaped me as an author.

4. ESN: What are some ideas from the nonfiction book that might be applicable to the lives of Christian academics, whether they study theology or not?

I think one of the chief things a Christian academic can and should take away from my theology book is this: we were made in the Image of a Creator, we ought to, therefore create and enjoy things created by others. Keep in mind, of course, that while my book focuses on fantasy and poetry, these are not the only things humans create. Dr. Alison Milbank, one the examiners for my PhD, once said to me that for David Jones everything from bread baking to cricket is a work of art. And for Jones, all human art is sacramental. Therefore, everything we do from making breakfast to giving birth to playing games has something artistic, creative, and thus sacramental about it. This, I think, should clearly change the way we see and interact with the world around us.

5. ESN: Now that both books have been published for a while, what are some of the responses to them that have really been encouraging to you as an author?

In a sense, just knowing that people thought my words worth reading, even just once, has encouraged me. It is good to know, at the very least, that I have good ideas, whatever may be said about their implementation. Most people who have read either work have had good things to say about them, which has affirmed in me that writing is something I’m halfway decent at and should keep doing. It’s also just been wonderful to share my creative world with friends, family, and total strangers. I’ve spent so much time there, and it is so wonderful that I get to share it with others.

6. ESN: How do you see the ideas you’re working with in your books enriching your ongoing life as a teacher and scholar?

The importance of deification helps me remember, to paraphrase C.S. Lewis, that every person I meet is a potential god. It helps me to see Christ in the other. Think about it, every stranger, every poor man on the side of the road, is intended to be so united to God that we can call the process deification. If that doesn’t change how you engage with people or students, I don’t know what will.

In my scholarship, I see myself pushed to, at least attempt, to write beautifully. Writing fiction, and writing about the importance of creativity for our lives, has reminded me that even my scholarship, whether new books or conference papers or journal articles, should be written beautifully.

7. ESN: What are some of the differences, for you as a writer, between crafting fiction and nonfiction?

At first blush the differences might seem obvious. After all, when writing fiction one is doing almost pure invention (or so it seems) and in writing nonfiction, one must first read, study, research, before writing. But even this distinction is often blurred. Being Deified is certainly speculative in places, meaning I’ve had to invent or go beyond what has typically been said on the subject of deification. When I very first began working on the story that would become On the Edges of Elfland (when I was a junior in college), I was reading up on old folk and fairy tales so I could decide how my own Faërie creatures would act and look. And yet they are different genre. Writing Being Deified required more research and more looking to the ancients, whereas Elfland required more invention, more listening and looking at the world around me in order to get my own world just right.

I think perhaps the chief thing I’d like to share is the call to write beautifully. After all, as Christians we recognize the transcendentals of truth, beauty, and goodness. I think all our work, should take these three things into account. Yes, sometimes one will come to the fore, but the others ought never to be left behind. So, write beautifully. 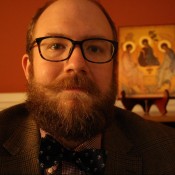