You are here: Home / Reading Lists / The Four Loves / Love Our World / Scholar’s Compass: God Was the First to Cry, Part 2 In the second of her two part series, Lauri Swann reflects on Navigating Justice for the Scholar’s Compass Lent series.

“God was the first to cry.” – Martin Luther King, Jr. in Selma

[H]e will wipe every tear from their eyes. Death will be no more; mourning and crying and pain will be no more, for the first things have passed away. – Revelation 21:4, NRSV

In the movie Selma, I would dare say that King’s reference to God’s cry was in the context of the senseless loss of life, for the hatred that killed Jimmy Lee, and for the unnecessary pain that is experienced when an elder must bury the younger. However, I would also dare say that God also cried, and cries, for the poor. God cries for the poor who unconsciously and consciously commit murder by withholding the love, grace and mercy—gateways to the kingdom of heaven being at hand. God cries for those who are victimized by such a withholding and thus suffer the consequences when God’s gifts, thus God, is withheld. King makes us aware that God cries. The word of God makes us aware that God cries (John 11:35). Thus it is only right that we who are Christians, and particularly during this season of reflection and repentance, remember to not only cry for that which grieves the heart of God—the injustices that plague God’s created order and God’s created—but that we listen to the cry of the other and respond with love, grace and mercy. We are called to be the incarnate witness of the one who is immeasurable.

Whoso stoppeth his ears at the cry of the poor, he also shall cry himself, but shall not be answered. —Proverbs 21:13 (Tanakh)

In the movie, King points us to one who is greater. In his teachings on human dignity, King taught us that the cries of the poor must not be stopped and woe to the one who does so. In essence, he manifested Proverbs 21:13. King believed that our ability to not only cry but to encourage others is a call of and responsibility to humanity, a broken humanity, within community. Within the first part of the Proverbs verse is the indictment of humanity. “Whoso” refers to any single person despite class, race, gender, Christian, saved and unsaved that refuses to hear the cry of the poor (economic, physical, mental, emotional and spiritual) which includes the marginalized, the suffering, the neglected, oppressed, and those who seek justice.  Those who cry refers to those who come “from a place of God-forsakenness and out of an impotent subjection to the superior power of evil” (Moltman 57) but it also comes from the other side of justice—the perpetrators, the offenders, murders, gang members, pimps, and racists—those who have become the willing accomplices of evil, and involuntarily slaves of violence. Both victim and perpetrator are in need of a healing hand; both are in need of God’s restorative power; both are in need of God’s manifestation of love, reconciliation, and hope. Both are in need of our cry.

When one recognizes the indelible truth that we are made in the image of God, there is a call to relieve the suffering of those who are bound. The response to such a call should come with great joy. This is what one does as a Christian. This is what one does as part of the divine family. We love together, extend grace together, and we cry together. During this season of Lent, let us be mindful that God did indeed cry first.

God was the first to cry. Will you be the second?

Let us pray: God, I thank you that you cried first. I thank you that, before I was angered, you were angered; before I grieved, you grieved; before I was confused and hurt, you felt it first. I thank you for being so engaged in my life that you count the very tears that fall. I am thankful that in your infinite ability, you are able to take the tears of pain and shame and mold them into a crown for your glory. This is what you did for me. This is what you have done for us. Let us, in this season of reflection and sacrifice, remember that the greatest sacrifice is to remove self-will and to replace with your will. And your will is to not only cry for justice, like you, like King, but to respond, like Jesus the Christ in love, grace, and mercy—the infinite gifts provided only and without measure by you, O God, the infinite one. Amen.

Jurgen Moltman, In the End, the Beginning: The Life of Hope. Fortress Press, p. 57. 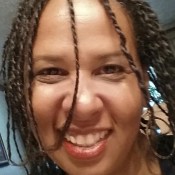 Lauri A. Swann received a B.A. from Syracuse University, an M.A. from The George Washington University, and her M.Div. and D.Min. from Wesley Theological Seminary where her thesis was Sex Trafficking within the Black Church Community: A Call and Response. She currently serves as the campus staff minister of InterVarsity's Graduate and Faculty Ministries, Black Scholars and Professionals (BSAP) Fellowship for the Washington, D.C., region, specifically on the campuses of Historical Black Colleges and Universities (HBCU). Before joining Intervarsity she served as both a youth and young adult pastor and taught in both the private and public charter school systems in Washington, D.C. She is married to Kevin and together they have three beautiful children. Lauri blogs at Peeling Oranges at Midnight and has contributed to InterVarsity's The Well -- a ministry of Women in the Academy and Professions.