You are here: Home / Christ / Christ and the Academy / Scholar’s Compass: Exit, Voice, and Loyalty

Last fall I took a course on institutional management theory, where I was introduced to economist Albert Hirschman, whose slim volume titled Exit, Voice, and Loyalty has seen wide-ranging influence since its publication in 1970. The book “virtually revived the field of political economy,” American Prospect editor Robert Kuttner writes in an article memorializing Hirschman, who died in late 2012.

Hirschman’s key concepts are simple. He seeks to understand consumer and member response to “failure”—of management, product quality, or other variable—and posits two options: exit and voice. Exit is exercised when consumers stop purchasing products or members leave an organization in response to quality deterioration. Consumers or members exercise voice when they express their dissatisfaction, either to the general public or to a particular person with power to effect change. In examining the interplay of these two ideas, Hirschman introduces “loyalty”: Choosing to stay in an organization and give voice to one’s concerns when exit is also a viable option.

As a communication scholar with roots in journalism and political science, I could identify traces of exit and voice everywhere I looked. As a journalist, I often fielded calls from angry readers concerned that I had chosen one word, or neglected another, in my latest article (using their voice). If the issue is volatile enough a smaller contingent of phone calls and emails informs me that one or several readers have canceled their subscription in response to my choice (choosing to exit). Examples abound in politics as well. Most compelling to me, though, was the application I saw to the church, as the moment I encountered Hirschman coincided with a cultural moment where many fiercely devoted members of Mars Hill Church were beginning to question leadership as threads broke in the church infrastructure, and multiple denominational conflicts had heated up regarding the value of working for change within denominations or defecting to another (the Charismatic Renewal Movement, for instance, works to emphasize the baptism of the Holy Spirit and recognition of charismatic gifts within mainline denominations).

The question of when to leave and when to cleave is not new; stories abound in the New Testament of churches negotiating theological conflict in one way or another. But Hirschman’s concepts can shed new light on the topic, particularly through his definition of terms. He intentionally disambiguates the concept of loyalty from the concept of faith (a distinction often not made; indeed, the Oxford English Dictionary defines loyalty as “faithful adherence to one’s promise, oath, or word of honor,” or “faithful adherence to the sovereign or lawful government.” Hirschman, however, insists these concepts are not the same, invoking Kierkegaard’s discussion of Abraham’s faith in sacrificing Isaac to assert that, “in comparison to that act of pure faith, the most loyalist behavior retains an enormous dose of reasoned calculation.”

This distinction lets us separate into two groups our behavior as Christians. In one group are the things we feel called to believe without question. On the other are those we have agency over: Events and structures we belong to but in which we have been given shaping power.

In the first grouping fall some faith essentials (for many Christians, belief in the Apostle’s Creed, or something like it, would fit here). In the second group fall many things you may take for granted or feel powerless to change: The way your particular faith community cares for the poor, or the recent leadership decision you felt uncomfortable with, for instance. In such cases, you may feel powerless and alone in a minority view, but often are not: Psychologists have determined that, most of the time, even a strong minority tends to keep silent because they presume the vocal majority represents everyone’s point of view. This behavior has ramifications that help explain atrocities like the Holocaust and Jim Crow laws.

But what if that changed? What if we started to see the institutional failure that surrounds us, in church and out of it, as our responsibility? If true loyalty demands a critical eye, mass silence helps nothing. Faith in human structures is misplaced; our faith in God demands that we are loyal to creation and, in particular, the church — a process that often should involve critical reworking, not silent acceptance. Where are you called to exercise your voice of loyalty today?

62. A Prayer attributed to St. Francis (From the Book of Common Prayer):

Where are you called to exercise your voice of loyalty today? 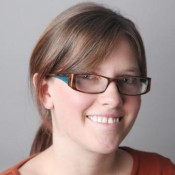 Ruth Moon is a third-year graduate student in communication at the University of Washington, where she studies journalism in developing countries. She is a leader in the UW's graduate InterVarsity chapter and is also a freelance journalist; she writes regularly for Christianity Today, where she is a contributing editor.