You are here: Home / Christ / Christ and the Academy / Scholar’s Compass: Remaining Faithful with B. B. Warfield

There is nothing that can befall us which is undirected by Him; and nothing will befall those that love Him, therefore, which is not directed by Him to their good. The fundamental thought is the universal government of God. All that comes to you is under His controlling hand. The secondary though is the favour of God to those that love Him. If He governs all, then nothing but good can befall those to whom He would do good. … Though we are too weak to help ourselves and too blind to ask for what we need, and can only groan in unformed longings, He is the author in us of these very longings—He knows what they really mean—and He will so govern all things that we shall reap only good from all that befalls us.

I grew up in a two-parent, secure, middle-class, Christian household, attending conservative churches and a Christian college, so it follows that I was raised in a safe environment where I could learn the Christian faith and make it my own. Ten years removed from my undergraduate days, by God’s grace, my faith has remained while I have gone out on my own and have started my own family.

But I know, with great sadness, that this is not true for everyone. The benefits of social media bring joy as well as discouragement as I read about friends with similar upbringings who have walked away from the faith. So I pray for the grace to be faithful and to guide my family as best I can.

This desire to be true to my faith extends to my academic life as well. As I pursue my doctorate and look towards the (slim) job market and a career in academics, I want to be faithful, knowing too many who have found the academic calling and personal faith too difficult to maintain and balance.

This is why B.B. Warfield’s words on Romans 8:28 are so meaningful to me. The Princeton theologian is known as one of the great Reformed scholars and a bulwark of Christian thought as the divides between modernists and fundamentalists took center stage in the early 1900s.

Less known is Warfield’s personal life. Having prepared for ministry, Warfield married his wife, Annie Pierce Kinkead in 1876. During their honeymoon in Germany, a severe thunderstorm affected Kinkead’s health; she never recovered fully from the experience and suffered from frailty and health trouble for much of her life. For almost four decades Warfield balanced care for his wife with his academic career. J. Gresham Machen reported that for many years Warfield never left her for more than about two hours at a time. While doing this, Warfield managed to publish dozens of books and hundreds of articles and sermons.

Warfield’s life was marked by faithfulness, both to his wife as well as his academic calling. He believed in the “universal government of God” and that nothing was outside of God’s control; in response, Warfield’s task was to be faithful, both to his wife that he committed to love, and to a faith that was increasingly under attack.

I look to Warfield as an example as I consider my own academic career. I don’t know what that career will look like yet, but I do know that God is in control, and all I need to do is to be faithful to Him and to the calling I’ve been given.

Does the sovereignty of God affect your daily work? If so, how?

Father, be gracious to me as you were to B.B. Warfield. Thank you for his example of faithfulness in his academic calling. Cause me to be faithful, day-by-day, to the work you have called me to do. In Jesus’ name and for His sake, Amen. 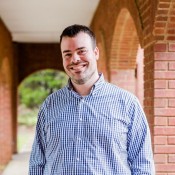 Daniel Roeber is fascinated by the intersection of theology, philosophy, and life. He currently is a doctoral student in the Department of Religion at Florida State University where he studies and teaches American Religious History under the supervision of Amanda Porterfield. His research focuses on religion and politics in the early republic. Dan lives in Tallahassee, Florida with his wife Sarah, daughter Emily, and dog Bailey.