You are here: Home / Christ / Christ and the Academy / Responding to the events of Boston Marathon 2013

Editor’s Note: Although the Emerging Scholars Network (ESN) is for the most part a “virtual community,” we are comprised of very real people bearing the image of God day in and day out. The below account is the personal story of InterVarsity Graduate & Faculty Ministry staff member Heather Ardrey living in the midst of extraordinary circumstances in Boston last week. Part of Heather’s story, This Shouldn’t Happen Anywhere, was previously posted on The Well’s blog (4/19/2013).

In addition to the below post, may you find encouragement in This Shouldn’t Happen Anywhere, Reflections on the Boston Marathon Tragedy (Amy Hauptman. InterVarsity-USA Blog. 4/17/2013), and a growing number of materials posted on ESN’s Facebook wall (including the loss of Lingzi Lu and the Run for Joy at Augustana College). As you have stories, reflections, and/or prayer requests to share about the extraordinary circumstances in Boston last week, please post in the comments section below and/or email ESN. Whatever your circumstances, feelings, research, thoughts, and assignments, please join me in offering this new week to the LORD in earnest prayer. ~ Thomas B. Grosh IV

The day of the Marathon was an exciting one (April 15, 2013). I have never seen a marathon, let alone the BOSTON Marathon. If you’ve never been to Boston on Marathon Monday – you should know, this is a Big Deal around here. I didn’t realize what a big a deal it is; it feels like the entire city is involved in some way. All 26 miles are lined by people in the neighboring communities, cheering on the runners. My husband’s uncle and cousin from Idaho were in town staying with us, so they could live out their dream of running the race. I have a friend who usually stakes out ground near Mile 21, so we decided to join their party to cheer on the racers.

We packed up our family to watch the race and enjoy a picnic lunch while we watched. We missed getting to see our cousin in the crowds of runners, but some of us were able to stay and watch our uncle pass. I left the festivities around 1 to let our youngest get a nap, and the rest of our family was home by 2:30.

We opted not to watch the race coverage, but were following our uncle’s progress on the computer. Around 2:50, we watched his little running man cross the finish line and stop running. I laid down for a nap, not yet knowing what had already happened.

I woke up to texts of friends and family asking if we were ok, and mentioning the reports they had heard reports about explosions at the race. Our phones were not working. I ran downstairs to see if our neighbors’ phones worked. Thank God, we were able to get in touch with our family down by the finish line. Our uncle had crossed the line about a minute to minute and a half before the first bomb hit. Thank God, they were fine – a little worn down from running 26 miles, but fine. The next 2 hours were a little tense as we navigated finding a way to get them out of the city to a place we could pick them up, while dealing with spotty cell coverage.

By 6 pm we were all safe at home recovering from the day’s events. But it was hard. Tuesday morning was harder.

Tuesday morning (April 16, 2013) was a hard day to try to get back into routines. Dropping my kids off at daycare as I headed into work was especially difficult. And yet, it felt like an important act of faith, an important testimony of trust in God in the face of the many uncertainties we face every day, but especially on a day like that one.

Harvard was full of unusual sights — there were marathoners everywhere, a larger police presence, and multiple national guards where normally there are only tourists, commuters, and students. But God was also present.

I met him in the person of a woman weeping in Starbucks who felt it was important to take a day off to mourn, even though she was not personally affected. I saw it in the anonymous people who were walking around the square holding signs that said “If you need prayer, we can pray for you. #prayforboston.” Their presence felt needed, and welcome. And people were asking for prayer.

As a community we worked on moving forward. Then Friday came (April 19, 2013). We thought that we were starting a day like any other. We were wrong. The first hint that something was going on was an email from my daughter’s pre-school telling us: “Due to police orders our program is closed for the day — April 19th Be safe!” I looked online as my husband showered. Our entire city (Watertown) was on lockdown after a car chase ended there overnight with a shootout and explosions. No one was to drive in and no one was to drive out. We were recommended to stay home and to keep our doors locked. We were not to open them for anyone except uniformed police officers. The neighboring communities and the city of Boston were asked to stay home as well.

For the most part people listened. It was nearly 6 pm before I saw a single person or car moving outside our window. Most of the day was really warm and really quiet. We enjoyed the sound of the birds. We checked in with friends, family, and neighbors to make sure they were safe. We tried to stave off cabin fever with a 4 year old and a 1.5 year old. We watched the news in snippets when the kids weren’t around and prayed for our neighbors who were being evacuated, even though we weren’t in the evacuation zone.

We saw our hair salon, our Target, our Mall on the news. We listened as they rattled off street names that were familiar and ones that were unfamiliar, but still too close. We tried to live our day as normally as possible under the circumstances.

It was only after the lockdown was lifted that we could hear things happening: increased helicopter presence, multiple sirens, cars driving when up until that point we had heard nothing but the wind. There was a moment, after our kids were in bed, when I heard something that sounded like multiple pops, only to then hear the NPR folks say, “We’re hearing reports that more shots have been fired.”

We waited, we prayed. We avoided the news, but checked in on occasion. And then it was over.

I don’t know how much you watched the unfolding of events on Friday, but ‘ground zero’ (the place of the first shootout) was just over a mile from my house. When they caught the suspect, it was just under a mile from here. It was one of the strangest days in my life, because we were asked not to even unlock our doors and yet it was so quiet, so beautiful all day.

When I woke up on Saturday (April 20, 2013) I was grateful it’s all over. There were only a few hours during the long lockdown that I actually felt nervous as I could hear the final ‘pops’ and the helicopters circling tightly overhead. It happened too close to home.  I am struck by the fact that this shouldn’t happen here. But I’m also reflecting that this shouldn’t happen anywhere, and it is the daily reality of people in many places across the world (including some other cities in America).  There are many many places where people don’t know when they wake up if they will be hit by a stray bullet, or killed by a suicide bomb.

My response is to be shaken, to pray, and to mourn on behalf of humanity because this should not exist – and yet it does. I’m not shaken only because it was so close, I’m shaken because people should not have to live like this – anywhere. Ever. And yet they do. We are not different than they are. Lord have mercy on us if we think we somehow ‘deserve’ to live in a safe place because we’re in America, or even Boston. Everyone deserves safety and peace.

As we move forward, and we will, we do it in cautious faith, hopefully not forgetting that there are others for whom fear is still the predominant reality; for whom “shelter in place unless absolutely necessary” is the unstated norm, not the exception.  I also move forward praying that there isn’t a violent backlash on the peaceful Muslim brothers and sisters who live in our midst. I pray we don’t judge the Muslim community by their extremists (if these brothers were even a part of that group…), in the same way that I hope people don’t judge the Christian community by theirs.

Today I plan to love on my family, enjoy the privilege (because that’s what it is) of being outside and spend lots of time praying. Praying for peace, praying for this young man who disturbs me but I find myself having some small measure of compassion for, and praying for wisdom as I move forward in the next few days and weeks, that I would have opportunity to show love and extend peace to others around me in my City (Watertown & Boston), and on the campus I serve.

I invite your prayers as well. 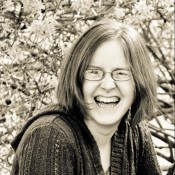 Heather currently works for InterVarsity's Graduate & Faculty Ministry at Harvard University. She is married to David and is mom to two beautiful children. She enjoys reading, cooking, playing board games, and hanging out with friends. She lives in Watertown, Mass.