You are here: Home / Christ / The faith of scientists
This week, I’m pleased to introduce a guest blogger, Jeff Gissing. Jeff serves as Area Director for InterVarsity’s Graduate and Faculty Ministries in Virginia and the Carolinas. An ordained minister in the Presbyterian Church (U.S.A.), he lives in Winston-Salem, NC, with his wife Anna, who is herself a GFM campus minister at Wake Forest, and their two children. Jeff has an MDiv from Beeson Divinity School and writes his own blog at http://twotasks.wordpress.com. (The title, as all ESN members should know, is a reference to Charles Malik’s landmark 1980 address, “The Two Tasks of the Christian Scholar“.) Thank you, Jeff! – Mike Hickerson
—

I was fortunate to be in Boston a couple of weeks ago. I was even more fortunate that she was able to get me an invite to the Cambridge Roundtable on Science, Art, and Religion.

Mike has written here about how Christians in the sciences are, George Marsden observed, called to practice methodological naturalism in their profession while disavowing ideological (or metaphysical) naturalism. That is, Christians in the sciences are to practice their discipline as though God does not exist despite their ardent personal belief that God both exists and interacts with the material universe.

This may cause some degree of tension for Christians in the sciences both in the academy and in the church. As Mike has noted here, sociologist Elaine Howard Ecklund of Rice University has written about this tension as part of her work on the religious perspectives of scientists at elite universities, Science vs. Religion: What Scientists Really Think (OUP 2010).

By a happy providence Ecklund was the presenter at the Roundtable where she specifically unpacked her findings about the ways in which scientists reconcile their belief in God with the naturalism assumed by their discipline. An intriguing topic.

What was even more alluring is that Dave Thom, MIT Chaplain and convener of these events, consciously tries to preserve parity among attendees between Christians and those with no belief in God or with some belief that falls outside of historic Christian orthodoxy.

An Evening of Dialogue

What could be a better way to spend an evening than at the Harvard Faculty Club with sixty-some guests from a wide range of religious beliefs, gathered to explore the ways in which personal belief in God intersects with science? I’m not sure that there are many other places where such an intentional forum for such discussions exists.

So my table and I gathered for hors d’oeuvres and listened as Howard shared what she’d discovered concerning the religious beliefs of scientists at elite universities. If you’re interested in more particulars of her findings read chapter three of her Science vs. Religion, “The Voice of Faith.”

As she wrapped up her presentation, waiters brought our entrees and we were given an hour to talk with each other around this topic. I shared that hour with some really delightful people: a sociologist, an oceanographer, a conductor, a philosopher, and a computer scientist.  Religiously we self-identified as “progressive Christian,” “non-practicing Catholic,” “evangelical,” “agnostic,” and “spiritual but not religious.” Perhaps not a fifty-fifty split, but close.

I was struck by the congeniality of our conversation. Of reflection, I don’t think that any of us really represented the margins of the science vs. faith debate. Surely the willingness to engage in such a conversation presupposes the absence of the more extreme views amongst both metaphysical naturalists and Christian theists.

So what of the content of our conversation? Space won’t permit more than a cursory overview. Almost every person at the table allowed for the legitimacy of personal religious belief as well as that people who are personally religious can practice good science. Perhaps where we differed, I am surmising here, is in the extent to which one’s personal faith ought to be integrated with one’s science. I think we all would agree that good science is methodologically naturalistic. Faith probably doesn’t alter the method one uses in designing and executing an experiment (absent normal ethical limitations). However, it might have a significant impact on the types of the questions one poses and the use to which one puts the knowledge gained by one’s work.

Of course when this is considered, it opens the door to healthy collaboration between persons of Christian belief and scientists of all religious perspective where a shared concern is at hand. An example shared at our table was a trip one of our companions had taken that brought together the Union of Concerned Scientists and the National Association of Evangelicals, two groups that perhaps historically have not had a great deal in common. As it happens, the shared concern was climate change.

I was intrigued by this dialogical model. Imagine the value of exporting this roundtable from Cambridge to other major universities. Of course, there’s more than one way of achieving the same end. InterVarsity chapters and Christian Study Centers are aiming at the same goal, but using different means. What struck me about the roundtable is that it provided a safe, respectful context in which to have a conversation around a topic that is problematic for much of our broader culture. The opportunity to bring together people of a variety of religious persuasion to discuss a timely and important issue is invaluable. It’s also a great deal of fun.

Mike puts aside his envy over Jeff’s evening and asks:

Have you encountered fruitful dialogues about science and faith? What do you think are the factors that lead to dialogue instead of conflict? 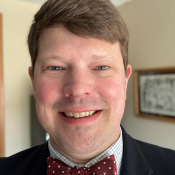 I am the Area Director for InterVarsity’s Graduate & Faculty Ministries in the Blue Ridge Area (VA, NC, SC). InterVarsity is an evangelical campus ministry active on more than five hundred college campuses across the United States.

I’ve been married to Anna Moseley Gissing since 2003. Anna also works with InterVarsity ministering to graduate students and faculty at Wake Forest University where she has served since 2006. We have two children: Nathan and Eliza.